Browse: Home   /   Bishan – The westernmost city to the main urban area of Chongqing 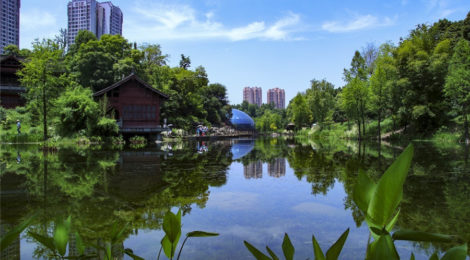 Bishan – The westernmost city to the main urban area of Chongqing

Dear readers, do you have a clear understanding of the administrative divisions of Chongqing? In May, with the release of a document, “the expansion of Chongqing’s main urban area” became a hot topic for discussion. 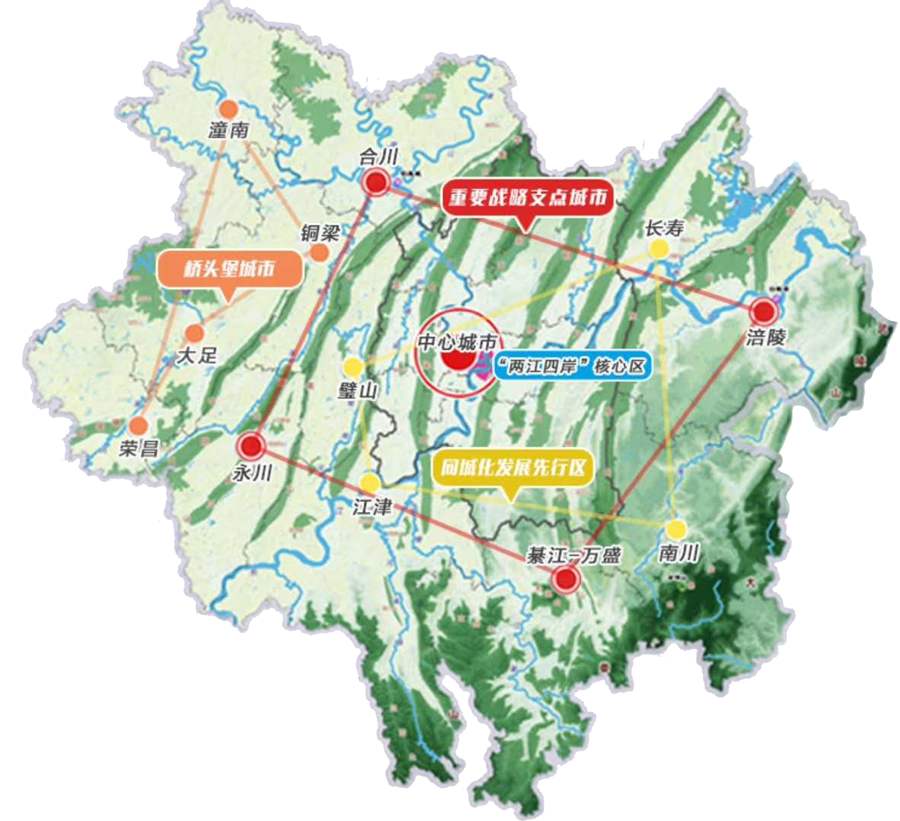 Chongqing upgraded the original concept of “9 districts in main urban area” to “21 main urban districts“, which can be divided into five levels: “3 core districts along the four banks of the Yangtze and Jialing River”; 6 central districts; 4 pilot zones of urban development; 4 strategic stronghold cities; 4 bridgehead cities. When expended to 21 districts, Chongqing’s main urban area will increase to 28,700 square kilometers with over 20 million permanent residents and an economic aggregate of 1.8 trillion yuan.

Among those 5 levels, the first two include the original 9 urban districts, and the third layer “4 pilot zones” consists of Changshou area, Jiangjin area, Nanchuan area and Bishan area, among which Bishan is at present the only one having a rail transit to the city center. On December 30, 2019, the Bishan station on Rail Transit Line 1 was opened into operation, taking only 7 minutes from Bishan to the university town in Shapingba district, and 61 minutes to the terminal station Xiaoshizi in Yuzhong district. With this being the fact, Bishan district, in some senses, has been connected with Chongqing’s traditional 9 urban districts.

As can be seen from the map, Bishan is an area of 915 square kilometers located in the west Chongqing with Shapingba district, Jiulongpo district in the east, Jiangjin area in the south, Yongchuan area, Dazu county in the west, and  Beibei, TongLiang and Hechuang area in the north. In history, Bishan area once served as an hub on the ancient Chengyu Road (the road connecting the old Chengdu and Chongqing), Qinba Road (connecting Qinling Mountains and Daba Mountains) and Jialing Road (connecting Sichuan area with the outside world). As the first station in the west of the main urban Chongqing, Bishan enjoys very obvious location advantages. 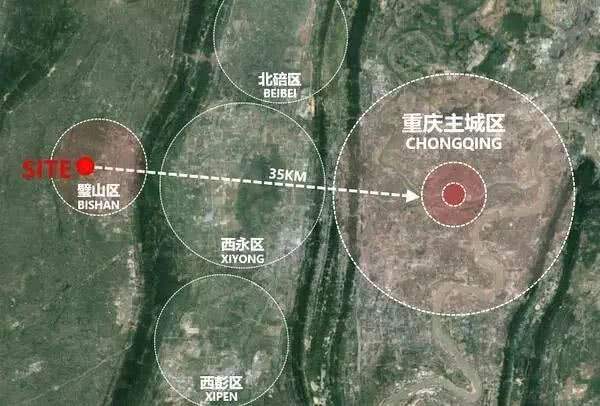 As an important part in building “Chengdu-Chongqing twin cities economic circle” and the pathway on Chengyu High Speed Railway and Chengyu Highway, Bishan actively promote its public transport development. On May 29 this year, the launch ceremony of the Chongqing Bishan “Sky Shuttle” demonstration line was held in Shuangyu Wetland Park in Bishan, which starts from the Bishan station in Chengyu High Speed Railway and ends at Bishan stop on Chongqing Rail Transit Line 1. The demonstration line, with the construction cost of 2.368 billion yuan, is 15.4 km in total, with a total of 15 stations established. The “Sky Shuttle” is equipped with high and new technologies such as the driverless system, automatic positioning, automatic fare collection and face recognition. Meanwhile, the rail transit system is driven by on-board electrical energy, characterized by small vibration noise, excellent gradeability and low cost. The “Sky Shuttle” launched this time is a three-carriage train and can be consist of six carriages at most, with the carrying capacity of each carriage 70-120 passengers. The maximum speed can reach 80 kph. 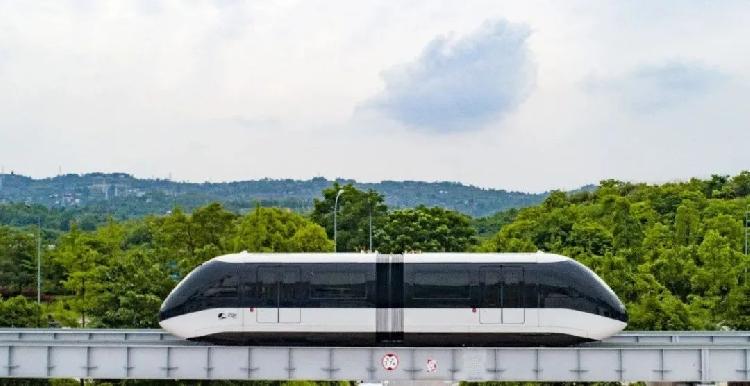 In terms of air traffic, the location of the second international airport in Chongqing has been settled in Zhengxing town, Bishan district. It is located in the southwest of Bishan district, connected with Yongchuan area to the west, and about 45 kilometers away from the downtown area of Chongqing. From the geographical position, Zhengxing town seems to be the best choice for the location of this airport. As an important development direction of Chongqing in the next 10 years, the western Chongqing region, with this airport, can be the hub connecting Chongqing and Chengdu. Besides, becasue it is only 45 kilometers away from the main urban area, it can ease the traffic pressure of Jiangbei International Airport and bring much more convenience for passengers coming in and out of Chongqing. 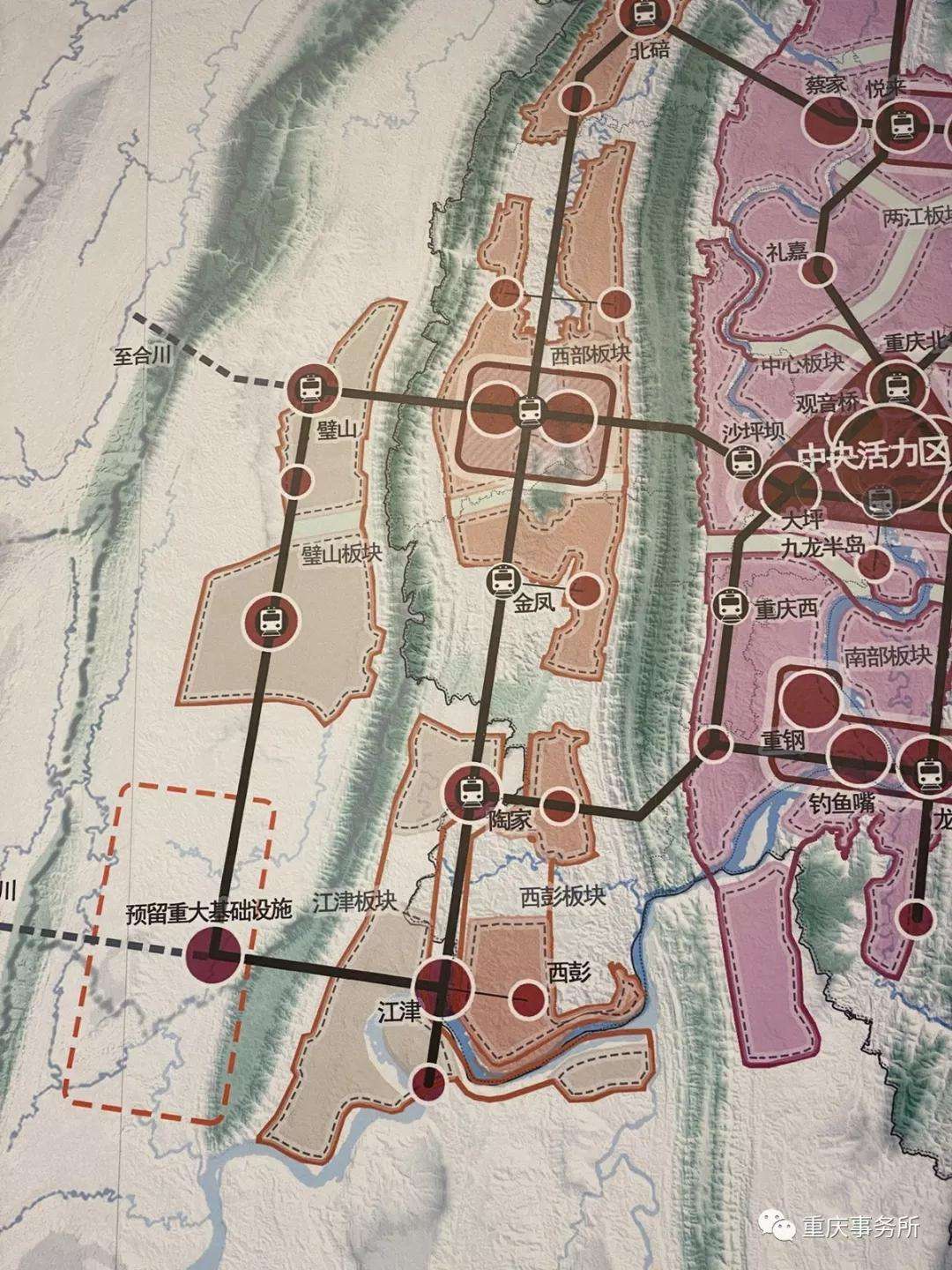 If we say traffic is the blood for a city, than the industry must be its flesh. Bishan National High-tech Zone is the development core of Bishan District. This Zone was approved by the State Council in September 2015 and is the second national high-tech zone in the city. The built-up area of the High-tech Zone covers an area of 18 square kilometers, with 1,056 enterprises in the park and 243 industrial enterprises above the designated level. It vigorously promotes the development of industrial clusters of intelligent equipment, information technology and life and health, and has become one of the first intelligent industrial parks in China.

In the first Smart Expo taking place in 2018, Bishan showed the “Sky Shuttle” independently researched and developed by BYD in the exhibition hall. While in the second edition of the Smart Expo in 2019, representatives of Bishan government and leaders of Bishan National High-tech Zone signed two investment cooperation agreements with CRRCTIMES ELECTRIC VEHICLE CO., LTD and KONKA GROUP CO., LTD, with a total investment of 32 billion yuan. From this case, it’s not hard to see that Bishan is constantly attracting new and high technology enterprises to settle in so as to provide driving forces for its development. 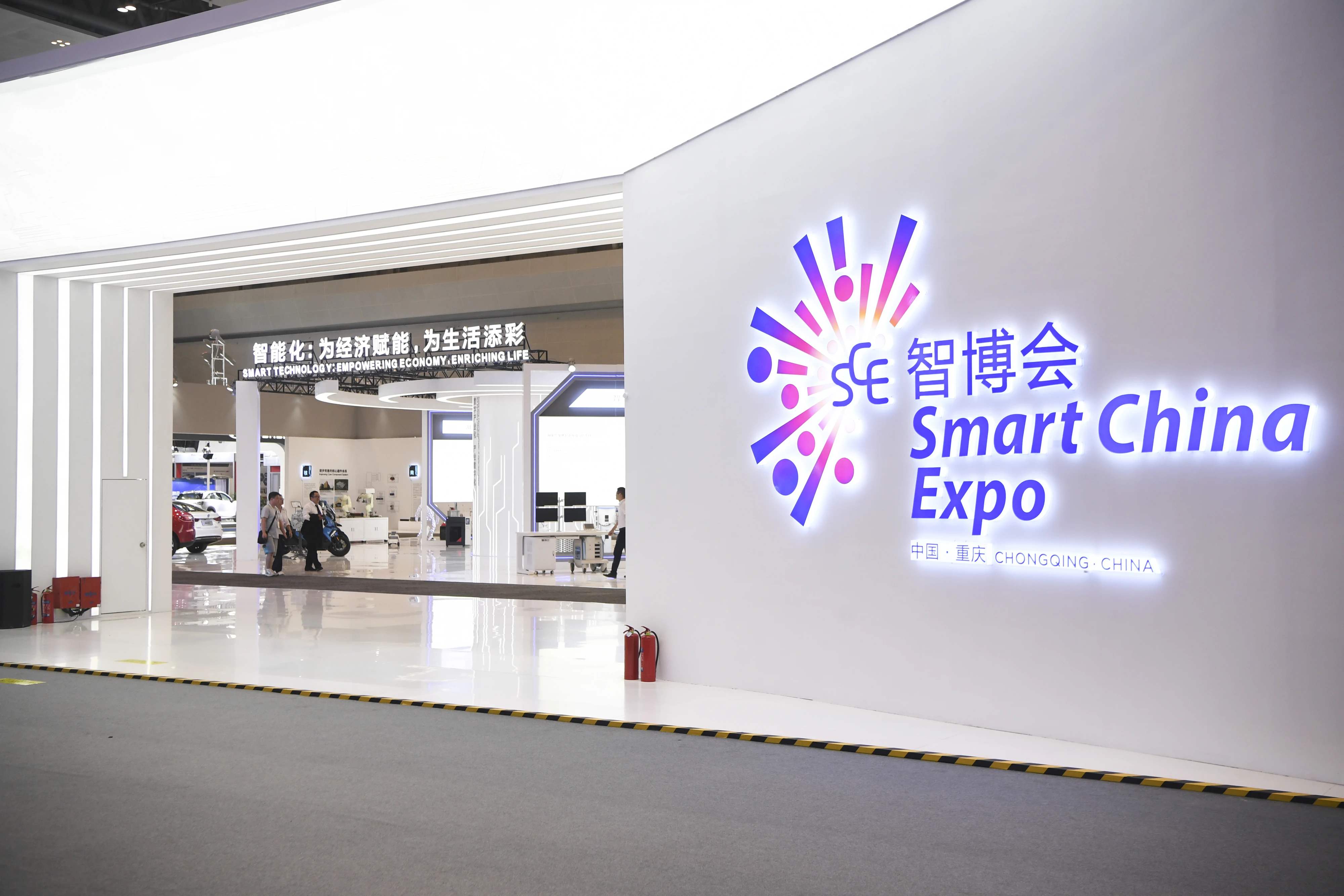 The natural scenery in Bishan is gorgeous, including Qinglong lake national forest park, the Guanyin pond national wetland park, the National wetland park and Yunwu mountains national wetland park. In addition to that, the cultural landscape there is also very rich with plenty of historical sites for visiting such as Bishan Confucius Temple, Lourdes Catholic Church and Chaoyuansi Memorial Archway. When it comes to food, Bishan rabbit and Laifeng fish are highly recommended. 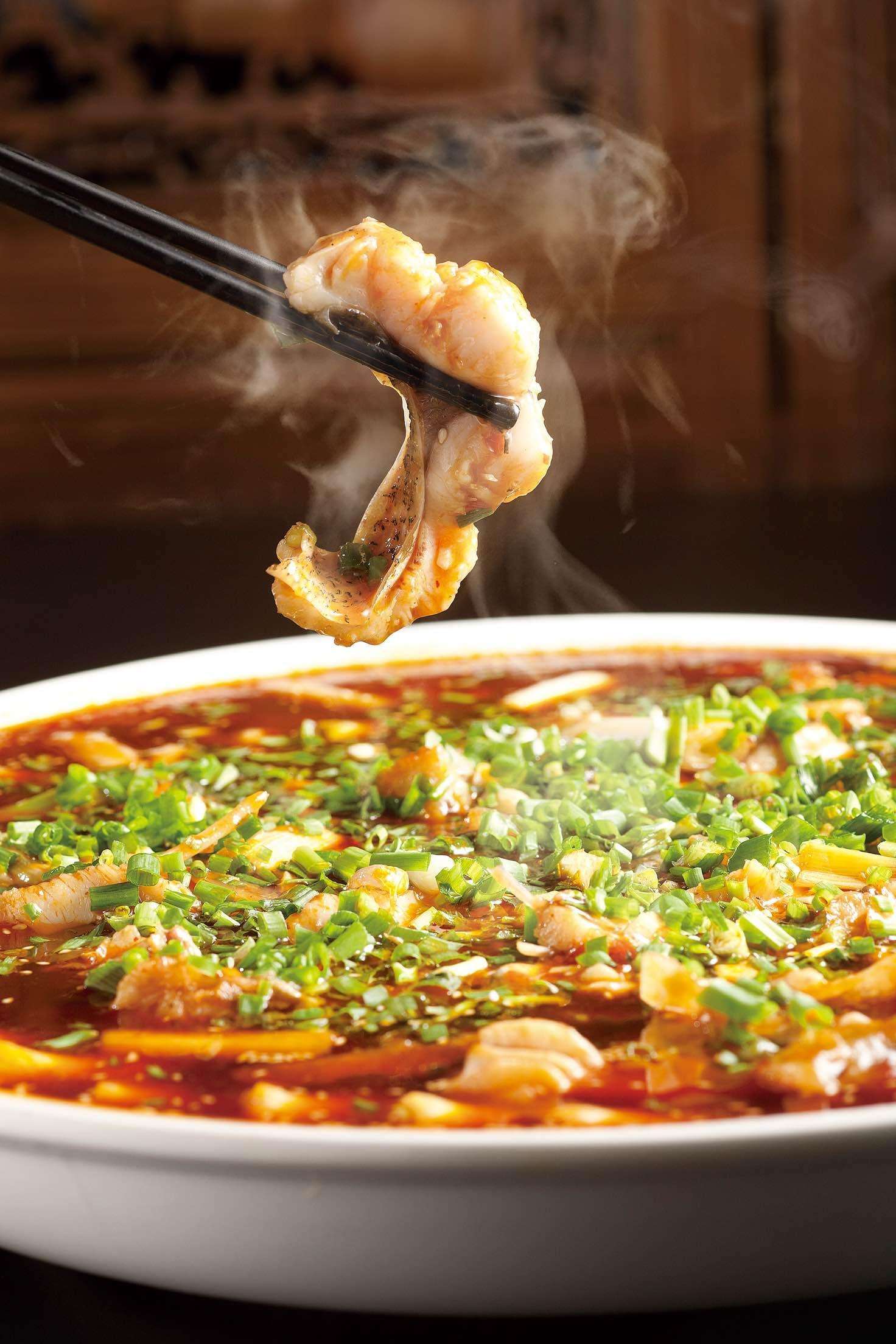 Sant’Anna School of Advanced Studies and Bishan District institutions closely cooperated in the past two years to the common project called  “Sino italian Innovation Base Camp”, with the help of our amazing partners of Chongqing University and the full support of the Italian Consulate in Chongqing.

Dear readers, in the future we will continue to explore other regions with you in our Chongqing Stories. Thank you for your attention!