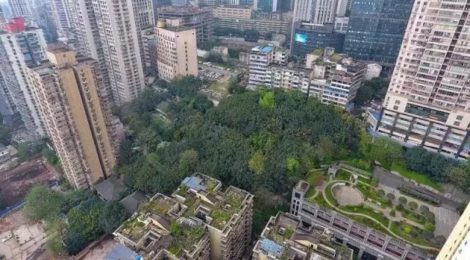 Chongqing People’s Park The hidden forest in the city

Dear readers, you may have visited plenty of Chinese cities, but have you noticed that every city has a “people’s park”? Today, we are going to explore the People’s Park in Chongqing, the oldest in town.

As we can see from the map, Chongqing People’s Park is located in Yuzhong peninsula, 300 meters away from Jiangbei – the landmark district of Chongqing. According to historical records, this park was built in 1929 after 3 years of construction, covering an area of 1.2 hectares. It was originally named “the central park” because of its location in the city center. Later on, with Chongqing being the provisional capital of the government of Chiang Kai-shek during the second Anti-Japanese War, it was renamed as “Zhongshan Park” (named after Dr Sun Yat-sen). After the establishment of the People’s Republic of China, it was renamed again as “Chongqing People’s Park” in July of 1950.

During the last May Day holiday, we went to the People’s Park. Strolling along the winding paths in the park, we saw luxuriant trees and plants. The whole park was scattered with flower beds, parkways, pavilions and rockeries in a well-managed and harmonious manner. Along the way we met tourists from from all over China, mostly senior citizens as well as men with birds in the cages and women wearing dancing dresses.

In Zhongshan pavilion, we came across Grandpa Wang and He. Asked about of stories of People’s Park, grandpa Wang started recalling his memory: “this park has been here since I was born. My grandparents took me here almost every day when I was a kid. People living around here like it for relaxation and amusement. At that time, there was no zoo, but we still could see different animals such as monkeys, tigers, peacocks and all kinds of birds.” Grandpa He continued: “this was not just a park at the beginning. When Chongqing was the provisional capital, the European division of ministry of foreign affairs under the government of Chiang Kai-shek was based here. Many celebrities – to name a few Guo Moruo (writer and archaeologist), Mao Dun (writer and literary critic) and Ba Jin (writer and translator) – often gathered here for tea. Xian Xinghai, the well-known musician, composer of the famous ‘the yellow river chorus’, even held a concert here in this park!”

But with the passage of time, most of the Chongqing locals, even who used to live around here left this behind and the new generations know nothing about the glorious past of this park. After the bombardment by the Japanese army, two monuments were built to commemorate the heroes who gave their lives to the revolution. One is “The memorial to the Sichuan revolutionary martyrs” for three Sichuan martyrs who died for the Huanghuagang Uprising in 1911, and the other is the “Monument to the death of firefighters in Chongqing” for 81 firefighters who lost their lives for protecting Chongqing residents during the Japanese bombardment. Those two monuments bring the sense of history to the park.

Been renovated at the end of 2017, the blue-stone path in People’s Park is even and non-slippery. Statues and Epigraphs with descriptions of the history of the park were placed in numerous spots, which attracted the attention of many visitors. We talked with some tourists about their impression and most of them agreed that this is a place worth a visit.

As we stepped out of the park, we find ourselves back into the modern and bustling metropolis. This hidden dense forest in the city center brings the booming and restless Chongqing a little peace.

Dear readers, we will continue to explore and discover more secret and unique places inside the modern Chongqing, and if you knew any, you are extremely welcome to share them with us. Thank you for your attention!