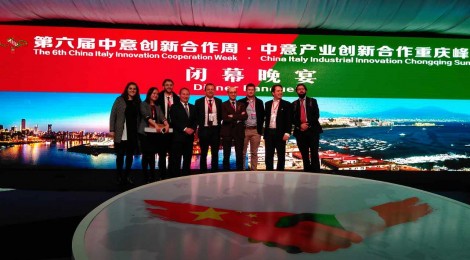 ggii / 21/11/2015 / Comments Off on China-Italy Science, Technology and Innovation Week comes to Chongqing / China through the Telescope, Past edition of Galileo Weekly Observer

On November 18th and 19th, the China-Italy Science, Technology and Innovation Week (CISTIW) took place in Chongqing. The 2015 edition of this important event jointly promoted by our governments, Italian and Chinese, was conducted in five Chinese cities: Beijing, Chongqing, Tianjin, Shanghai and Zhengzhou. The CISTIW is the most important forum for Sino-Italian cooperation in science, technology and innovation. As a proof, the presence of more than 170 Italian participants, including enterprises, start-ups, universities, research centers and public Following the opening days in Beijing, the most dynamic phase of the Week took place in Chongqing, with a rich set of proposed activities and large number of participants. Local authorities have shown their strong support to the event by sponsoring it with vast facilities for the whole activities and the accommodation for participants. During these days, the strategic role Sant’Anna School of Advanced Studies plays in scientific and academic exchanges between Chongqing and Italy has been underlined different times. Such role has been recognized by Italian institutions and echoed in the words pronounced by the Minister of Education, Universities and Research, Hon. Stefania Giannini. During her opening address at the Week, the Minister highlighted the presence of Galileo Galilei Italian Institute (GGII) within Chongqing University (CQU) and its connecting role between a well-known university of excellence and China’s scientific and technological development. The ability of Galilei Institute to intercept the innovative potential rising in this area of the world conveys a clear message that Italy wants China to receive.

The Minister Giannini, accompanied by the Italian Ambassador in China, Ettore Sequi, and by the Italian Consul General in Chongqing, Sergio Maffettone, met with the President of Chongqing University, Zhou Xuhong. Witnessing this historic event, a delegation from Sant’Anna School – the main Italian academic partner of CQU, whose campus host Galilei Institute since 2007. Taking part to the meeting: Piero Tonutti, Vice-dean for International Relations, Alberto Di Minin, Professor of the Management Institute and GGII Director. On this occasion, a honorary professorship was conferred to the Minister, who also delivered a lectio magistralis for the students of Chongqing University. Minister’s lectio, the second seminar of the series “China through the Telescope” organized by the GGII took place, with the scientific supervision of Sant’Anna School and the sponsorship of Confindustria Toscana. Professor Di Minin was the keynote speaker of the seminar with a presentation titled “The relevance of Chongqing in the framework of Italian strategy in Science and Technology cooperation with China”. He underlined the centrality of Chongqing in the framework of the cooperation between China and Italy for research and innovation.

The value of the presence of Galilei Institute was stressed also by the General Consul Maffettone at the opening ceremony of the second day of the CISTIW. Addressing the Italian participants and a crowded audience of Chinese attendances, he wanted to state the role of GGII as a landmark, not only for research, but also for those entrepreneurs and firms which are looking at this area of China.

During the second day in Chongqing, Sant’Anna School of Advanced Studies and Italy’s National Research Council (NRC), together with other local academic partner, held a joint workshop about health and sustainable development focused on new material, technologies and management strategies. Among Sant’Anna lecturer Leopoldo Trieste (Sant’Anna School and VICS Consulting) and Federico Merlo (ERGO Slr, spin off of Sant’Anna School), together with other experts from Sichuan University, NRC, Third Military Medical University in Chongqing, Chongqing University, DHITECH in Lecce. The workshop was led by Marino Lavorgna (NRC) and Prof Di Minin.

The delegation from Sant’Anna also visited the Green and Intelligent Technology Center, research and development center for new technologies, including robotics, 3D printing and graphene. Organizer of the visit was Xie Kaiji, technology transfer manager of the institute and executive student of the Doctorate in Business and Administration, join program conducted in partnership between Sant’Anna School, Chongqing University and Grenoble School of Management.