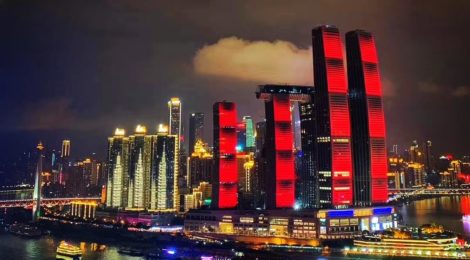 ggii / 05/11/2019 / Comments Off on Chongqing urban tourism: the “Web-star” of Western China / Past edition of Galileo Weekly Observer

Those looking today at Chongqing see a bustling metropolis full of energy located in the South West of the People’s Republic of China. But the situation has not always been so prosperous, and the city has experienced ups and downs, often associated with economic policies managed by the central state. In this Observer we would like to focus on Chongqing’s tourism boom of the past few years. Is tourism in Chongqing able to bring tangible economic growth to its people?

2. URBAN TOURISM: is Asian the future of “urban tourism”

As underlined in a recent publication on the theme of “urban tourism” (Bellini & Pasquinelli (2017), Tourism in the city. Towards and integrative agenda on urban tourism, Springer), cities have an increasingly central role in the development of policies that favor economic development and present themselves as the knots of globalization (also look at “Parag Khanna (2016) Connectography: Mapping the Future of Global Civilization, New York: Random House”). Several organizations have developed global research on the role of cities for the tourism sector. One of these is certainly the UNWTO, which has launched an annual appointment, the “Global Conference on city tourism“, which in fact signals the institution’s renewed interest on the theme of urban tourism. The same organisation has also launched the “Cities impact measurement project“, to underline the necessity of collecting sub national measurement useful to local stakeholders, stressing how the sub national tourism is a phenomenon that need to be carefully studied and analysed.

Another publication to consider when looking at cities and their role in tourism is definitely the “Mastercard Global destination cities index report“, whose 2018 edition highlights how there are four regions in the World where cities play a prominent role (United States, Europe, Middle East, East Asia and Southeast Asia). Looking in particular at the data of 2018, which take into consideration 162 global cities, Asia appears as the center of world tourism, and its cities are often the main players. The cities therefore appear as centres for economic development, and urban tourism is an important element in their growth model. Above all, Asia plays a key role, as shown in Figure 1, with numerous cities on the list of “Top destination cities” in terms of “total international visitors”.

3. CHONGQING URBAN TOURISM: Chongqing as an urban centre for tourism

Before talking about urban tourism in our Municipality, it is necessary to add a few information about Chongqing. Often described as the “largest city in the world”, Chongqing is in fact one of the four autonomous municipalities of the PRC (together with Beijing, Tianjin and Shanghai, but the only one in Western China). Its extension is 82.403 square kilometres, which is roughly equivalent to the territory of Austria.

If we consider the population of Chongqing, it reaches a total amount of thirty million people, according to data from 2016. According to Country Digest, this figure can be divided into two main parts: the “City proper”, inhabited by 8.5 million of people, and the “Wider urban area”, where the number or citizens is 18.4 million. Taking back the data of the 2010 6th National Population Census, Chongqing population has suffered a reduction of about 1.5 million units from 2000 to 2010, while there was a  huge increase in the number of economic migrants to the Municipality. If, in terms of population, Chongqing is therefore one of the largest administrative realities in the PRC, its distribution of citizens, urban density and urban area are very inhomogeneous and diverse.

The urban center is also called “Central Chongqing“, and includes nine of the 24 districts (Yuzhong, Jiangbei, Shapingba, Jiulongpo, Nan’an, Dadukou, Banan, Yubei and Beibei) in which the Municipality is organised, and its size is only 5473 square kilometres. It is important to underline that in the whole Municipality of Chongqing several urban centres coexist, and that the distribution of the population is not uniform. According to data from the “World Urbanization Prospects 2018”, the urban area of Chongqing recorded 14.838 million people in 2018, while the number is expected to grow to 18 million in 2025 and exceed 20 million in 2030.

Chongqing has very important figures in terms of population growth, making it the most populous of the four Chinese municipalities, and it is considered a national urban tourism centre. The city is called “Wanghong city (网红城市 wanghong chengshi)”, meaning it is a popular tourist destination throughout China and especially on the web, thanks to its breathtaking scenery. On Chinese social platforms, and in particular on “Douyin”, which is very similar to Western social networks like Snapchat and Instagram, Chongqing has experienced incredible growth in popularity in recent months, especially at a national level.

As regards to the tourism sector in Chongqing, in the last few years various economic parameters have significantly improved, both in terms of tourism expenditure and number of employees, revenue, number of enterprises, and tourism sector profit. According to the “Chongqing Municipal Culture and Tourism Development Committee”, during the last “Golden Week”, (the one week vacation that includes the National Day, from October 1st to 8th 2019) the city welcomed the astounding figure of 38.59 million visitors, both domestic and foreigners, up 10.6% on the previous year. According to the Committee, tourism in Chongqing in the first week of October brought RMB 18.76 billion to the city, an increase of 32 % from the previous year.  In Central Chongqing, in particular, tourists visited Hongya Cave, Guanyinqiao Business District and Landmark riverside Danzishi old street en masse, while in the whole Municipality the most visited destinations were Chongqing Hongyan Revolution History Museum, the Three Gorges, as well as the famous hot springs.

The city during the Golden Week was also a magnificent open-air stage, thanks to the fascinating lighting of the iconic skyscrapers of Central Chongqing. Tourists were able to admire the new “Raffle City” tinged with bright red for a show they will remember for long time.

4. CHONGQING and the tourism challenges

The number of visitors during the “Golden week” in Chongqing was considerable, but many Chongqing residents perceived the influx of tourists as disproportionate and sometimes invasive. As from the previous edition of our Observer, centered on the Chongqing development model, the “tourism model” of the Municipality will also have to be carefully planned. The city has enormous potential, and huge investments have been made by the government of the Municipality. Over the years, Chongqing has represented, more for the Chinese than for the foreigners, a “must visit” touristic city. For this reason, it will be interesting to analyse the tourist development of Chongqing and to see if the Municipality will shift towards a model based on sustainability and openness towards internationalization, including the one of tourist flows.

Please share:
Tags: Western China Tourism Series
← On the Streets of Chongqing – All pictures
On the streets of CQ – Just chill →