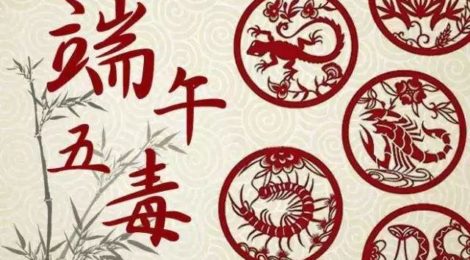 The Origin of the Dragon Boat Festival （Chongqing version）

Dear readers, how did you enjoy the recent Dragon Boat Festival? Did you get the chance to eat Zongzi (a sticky and glutinous rice ball wrapped in reed or bamboo leaves) or watched dragon boat races? As you may know, the  Dragon Boat Festival is a Chinese traditional festival to commemorate Qu Yuan, a poet and statesman of Chu state active during the Warring States period (about 340-278 BC). In the past week, we’ve heard another legend about the origin of the Dragon Boat Festival from some senior Chongqing people.

A long time ago, the fifth day of May on lunar calender used to be the day when the five poison immortals – namely the scorpion, the snake, the spider, the centipede, and the toad – come to the secular world to accept the worship of their descendants. Every year, when they descend on earth, all the Poisons will also come to Chongqing to bow and celebrate the immortals. After the immortals left, the Poisons continued to ravage the city for nearly a month, making the life of Chongqing residents sick and miserable. Therefore, many people fled their homes before the fifth day of May, finding another place outside the city to avoid disaster, and return back home after the end of May.

One year, Taishang Laojun (The Grand Supreme Elderly Lord) came to the Southern mountain and found it a good place to practice Taoism, so he stayed and digged up a cave for practicing. When May was approaching, more and more people gathered to Southern mountain to take refuge. Looking at their distant homes and thinking of having to go through the rigors of living in the wilderness this month, they couldn’t help but burst into tears. Their cries alarmed the old Lord. He turned into an ordinary Taoist priest and came to this group of people, asking reasons for their sadness. After listening to their talk, Taishang Laojun decided to help them. But as the five poison immortals are also gods in the heaven, just like him, he can not personally stop them coming to the secular world. After much thought, he had an idea. He told all the men in the group to make nine dragon boats by the river, each with a drum at the bow, and then hide them. He sent women to the mountains to gather calamus and mugwort, then hang those herbs on the door, and put wine on the table. Lastly he let all the children to set gongs and drums in a gorge outside the town. All the preparations had to be ready before the fifth day of May. After giving these instructions, he turned his own hairpin into a high iron pole and inserted it in an open place on the Southern mountain, asking everyone to wait for his orders signaled by the light of lanterns.

On that day, the five poison immortals found out that there was no one in  town, calamus and mugwort were hanged in front of every door, and realgar wine was placed on the table. The smell of the herbs and wine frightened the Poisons and discomforted the immortals. They hurried out of the city with rage, deciding to poison the river. Seeing this, Taishang Laojun immediately hanged a lantern on the mountain. Man started rowing the dragon boats and beating the drums on this signal. Because Taishang Laojun cast a spell, the moving dragon boats accompanied by thundery tum looked like real dragons wandering on the river. The five poison immortals was scared and fled along the river. At this time, Taishang Laojun hanged another lantern on the iron pole. On the sight of this, children on both sides of the gorge immediately beat the gong. The five poison immortals were so freaked out that they run away and didn’t  appear anymore.

After this battle, everyone was exhausted. Taishang Laojun taught them to eat glutinous rice wrapped in bamboo leaves and sew sachets with cinnabar realgar and other herbs inside to exorcise evil spirits. Since then, rowing dragon boat, eating Zongzi, wearing sachets, drinking realgar wine has become the annual customs on the fifth day of May. Later, the three places where these events took place were named as follows: “Laojun Cave”, “Hidden Dragon Town” and “Gong and Drum Gorge”. The iron pole is still inserted in the Southern mountain.

Alright, that’s the Chongqing-version of the origin of the Dragon Boat Festival. Isn’t it interesting? We will continue to find more stories about the history and culture of Chongqing. Stay tuned! Thank you!