Browse: Home   /   Urbanisation in China and the Chongqing-Chengdu city cluster 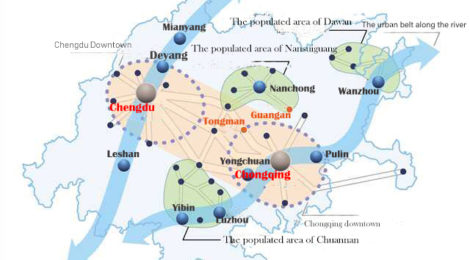 Urbanisation in China and the Chongqing-Chengdu city cluster

In March 16, 2014 the State Council of China approved the implementation of the “National new urbanization plan 2014-2020”. As stated by Fang and Yu (Fang C., Yu D., 2016, China’s new urbanization, Springer Geography, Berlin, p.54), the essence of the plan was to stress the development of Chinese Characteristics New Urbanisation, with a focus on urbanisation quality and to clarify the development path, the primary goals and the strategic tasks for China’s future urbanisation, and coordinate relevant system and policy innovations. The plan was also intended to be the “macro, strategic, and fundamental guidance” for China’s health urbanisation in the future.

The primary strategy of the plan is to support the “urban agglomeration”, strengthening and optimising the three mega conglomerates of Beijing-Tianjin-Hebei, that of the Yangzi River Delta, and that of the Pearl River Delta, in addition to the formation of secondary urban conglomerates in the Northeast and Midwest regions. In this way the aim is to create “brand-new geographic units” for the country, that will allow it to participate in global competition and the new international division of labour.

From the national point of view, the government aims to develop two horizontal axes and three vertical axes (as displayed by figure 1), creating an integrated and connected urban structure in a fast and effective way.

The creation and implementation of the regional urban centres of Chongqing and Chengdu follow these guidelines and seek to act as a driving force for the economic development of the region, which fits into the westernmost vertical axis, and is connected, thanks to the presence of the Yangtze River, to the central horizontal one.

The two cities represent the hub of the fourth Chinese urban engine. They are the two pins of the “Western Development strategy”, launched twenty years ago. According to an interview reported by He, Yao, Xu, Cai and An (Yao H., Xu Zhangyong (eds), 2017, Redevelopment of Western China, Research Series on the Chinese dream and China’s Development Path, Singapore, Springer) the region of the two cities today represents 5% of the national economic aggregate, with a projected GDP of RMB 5.5 trillion (around 635 billion Euro), and it is expected to account for nearly 8% of the national total, basically forming a growth pole by itself.

In addition, the Autonomous Region of Tibet and the two Southwestern Provinces of Guizhou and Yunnan, as stated by the authors, have already started to seek opportunities to coordinate with or even integrate with the Chengdu-Chongqing region as a growth pole for the whole Southwest of China.

The Chongqing-Chengdu region focuses on the industries of automotive and motorcycle, natural gas, equipment manufacturing, electronics, aviation, and the integration of mining and power generation.

Chongqing and Chengdu are modern cities and renowned international destinations. Their economic growth in past few years has been outstanding and in the coming years they are expected to become the core centres for development and research in China, thanks to a national and regional cooperation development strategy.

The latest step forward was made on 10 July, when the two cities signed a new agreement for the creation of an urban cluster in Western China, named “Key working plan on deepening the Sichuan-Chongqing Cooperation to promote the integrated development of Chengdu-Chongqing city cluster“.

The document includes 36 topics in which Chongqing and Chengdu can work together, for a total of nine macro areas. Chongqing and Chengdu will represent the fourth most important urban and economic cluster in China, in addition to the Beijing-Tianjin-Hebei, the Yangtze river Delta and the Guangdong-Macau-Macao Greeter Bay Area. For this reason, in the coming years, we expect Western China to play a central role for China’s national and international development plans.

Given the turbulence at the international level, the trade war between China and the United States, and China’s increasingly important role in the world economy, the Western Chinese region remains a point of reference and a laboratory for the development and economic growth of China. At the same time, the search for economic stability, sustained and sustainable growth, but also the transition from “quantity to the quality of growth”, will inevitably affect how the Chongqing and Chengdu city cluster will develop in the next years.

For comments and suggestions feel free to contact us at