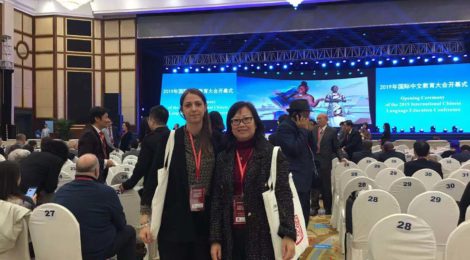 The 1st edition of the International Chinese Language Education Conference was held in Changsha On December 9th.

Over 1,000 representatives from Confucius Institutes and Chinese language education organizations, from over 160 countries and regions, gathered in the capital of the central China’s Hunan Province, to attend the biggest and the most important conference on Chinese language.

Our Confucius Institute of Sant’Anna School of Advanced Studies of Pisa brightly attended the Conference in Changsha.

The main theme of the conference was the “Innovation and Development of International Chinese Education in the New Era”. More specifically, the central issues of the meeting focused on the intensification of institutional reform, on the enrichment of the management of the Institutes and school resources. In general, how to push forward a pluralistic innovation and development of Confucius Institutes all over the world, not only in terms of quantity, but quality.

Different Government Officials attended the opening ceremony:  the inauguration was chaired over by Mr. Tian Xuejun, Vice minister of Education in China and welcome remarks speeches were given by Mr. Du Jiahao (Secretary of Hunan Provincial Committee and chairman of the standing committee of Hunan Province) and Chen Baosheng, the Minister of education. After them, few speakers from different countries gave some speeches about their own experience and impressions, such us Lance Tatum, vice Chancellor for Academic Affairs at Troy university(U.S.A.), Professor Balan Luminita Rodica, Head of the Chinese department at University of Bucharest (Romania),  Ratsimiseta Oninaiana Andraimamonjy, Local Chinese language teacher in the Confucius Institute of Antananarivo (Madagascar) and Furukawa Yutaka, Vice president of the Intenrational Society from. Chinese Language Teaching, and former president of the Japan Association of Chinese Language Education (Japan). The president of Beijing Language and Culture University  gave a speech in this session, as well.

“Language education is an important part of education, and international Chinese education is an effective way for people in all countries to learn Chinese and understand China” stated Chen Baosheng, keeping the attention focused on the importance of Chinese language as a common value. He restated the purpose and mission of the Confucius Institute and that efforts are needed both from China and Foreign Countries to teach and cultivate talents through the learning of Chinese language.

However, it clearly emerged that, in order to guarantee the sustainability of the Chinese language education, it is important to support the universities Chinese program and support teachers from all over the world. This can only happen while providing new guide for teachers and students and the standardization and normalization of the Chinese languages program, but at the same time integrate all with the nature of local realities. This was the aim of the conference.

On behalf of the Ministry of Education, Chen proposed six innovative measures to support international Chinese language education in the next two to three years, including:

-strengthening the attractiveness of the overseas posting of Chinese language teachers,

-supporting and encouraging people from all walks of life to engage in the Confucius Institute’s development and international Chinese language education.

Lately, the keynote speech was given by the Vice Premier of the State Council of RPC, Madam Sun Chulan: she stressed once again the unique character of the Chinese language: “Language is the bridge of communication, the most important asset to understand China and Chinese culture”.

Her attention was focused on the fact that we are living in a world that is becoming more and more multipolarized, characterized by extreme cultural diversity and profound interdependence. In this sense, exchange in cooperation, politics and economics are definitely needed but, above all, what she thinks is very important is that cultural and languages exchange should be more extensive.

In this situation, Madam Sun stated that “China is deeply integrated to the world” :in fact, the PRC is recently committed in bringing opportunities for the development of other countries, attracting more and more people to China, for business cooperation, mutual learning and tourism. Confucius Institute is playing a crucial role in delivering this kind of development, as it is detected from the latest deep investment, especially in African countries.

Madam Sun also stated that the Chinese Government has the duty to push forward international Chinese language education and should provide support for all people who are willing to learn Chinese, in terms of teachers, teaching materials and courses.

Exchanges and cooperation should be carried out by institutions of higher education, enterprises and social organization, both in China and abroad, and should be based on principles of mutual respect, friendly negotiation equality and mutual benefits.

During the event 32 workshops were also held, where participants discussed and exchanged ideas on issues, such as, international Chinese language education policies and standards, teachers, textbooks, teaching methods, examinations, brand project construction, as well as deepening cooperation between China and other countries.

During the workshops, many countries has presented their concrete experiences, the academic and cultural events that they have been conducting and their suggestions to improve the collaboration with Hanban. In fact, what has emerged is that sometimes they miss the presence of Hanban in terms of resources: expertise such us more teachers from China and syllabus for teaching mandarin are mostly needed.

One of the most interesting workshop we had the chance to attend was the one about the Innovative Practices of International Chinese language in the era of AI”.

Many delegates from different countries has presented their own experience: for example, Heidelberg Confucius Institute (partner with Shanghai Jiaotong University) presented its development of a virtual Chinese courses. The most difficult part, they explained, has been the adaptation of the text book to an online course and the preparation for filming. They received a big support and all the help they needed from Jiaotong University, especially for the remastering and editing part.

At the end of the conference eight countries have established their inaugural Confucius Institutes or classrooms in 2019, according to the final reports of the 2019 International Chinese Language Education Conference reports, that ended Tuesday 10th December.  “These language programs serve as a bridge for deeper understanding, communication and cooperation around the world”, underlined once again the Chinese Vice Minister of Education Tian Xuejun at the closing ceremony of the conference.

To conclude, it is possible to say that Confucius Institute are still playing a crucial role in reshaping the image of China as a responsible global power. In fact, it is well known that in recent years China has been working with different nations for ensuring the establishment of long-term cooperation mechanisms because of Chinese strategic interests worldwide. It is worth saying that PRC is doing this not only on the economic side (such as BRI): as the content of International Chinese language Education Conference has demonstrated, alongside economic tools, the most powerful Chinese tool is the education and promotion of Chinese language.

What is sure is that China will be committed in bolstering academic and cultural cooperation all over the world. All the efforts should be committed from both Chinese and international side towards the creation of a modern international Chinese language education system, more open, more inclusive and standardized.