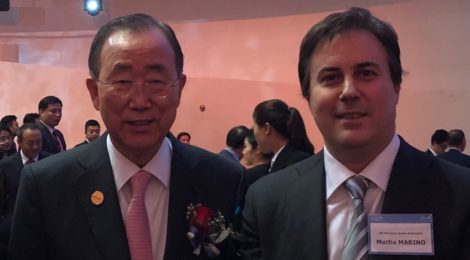 ggii / 18/11/2019 / Comments Off on Second edition of the Asia-Europe Leaders’ Cooperation Dialogue: Interview with Mattia Marino / Past edition of Galileo Weekly Observer

On December 2nd around three hundred business leaders, members of multilateral organisations, national governments and institutions from Europe and Asia will gather in Chongqing to attend the second edition of the Asia-Europe Leaders’ Cooperation Dialogue. We have interviewed Mattia Marino, CEO of The European House Ambrosetti in China, to discuss about the event.

Good morning Mister Marino, how is the organisation of this year’s event going on?

Everything is moving forward according to our plans. We are confident about the success of the Dialogue and the participation of Ministers of the Italian government, Italian and European former Prime Ministers and international figures to discuss relevant issues in the area of relations between Asia and Europe. We received great interest and support from the Chinese side, especially from the leadership of Chongqing Municipality, which will be represented at the forum by Party Secretary Chen Min’Er and Mayor Tang Liangzhi.

Where does cooperation between “The European House – Ambrosetti” and “Boao Forum for Asia” come from?

Cooperation between The European House – Ambrosetti and the Boao Forum for Asia started about five years ago, and it developed, as often happens in China, from a relationship of trust based on respect for each other’s expertise. The relationship then turned into a friendship, streghten by the mutual respect between the main actors. For the first two years we hosted each others in our respective flagship forums: they invited us to take part in the Annual Conference organised by Boao Forum in March, while we invited them to the Intelligence Summit in Cernobbio, which has been held every September of the past forty-five years in the beautiful Villa D’Este.

We were looking for a reliable partner in China, while Boao was looking for a partner that could bring more Europe to their annual forum. As “The European House – Ambrosetti” we launched our candidacy, driven by an institutional duty, with the goal of playing a decisive for Italy in the context of relations between Asia and Europe. We also wanted to offer a platform for dialogue among European countries and Asia, China in the first place.

Why did you decide to create a Forum?

Our international summits represent an effective tool for putting together the essential keys for doing business. They are respectively the knowledge of a specific theme or sector, the construction of a network of personal relationships, and last but not least, the creation of a relationship of mutual trust to be consolidated over time and strengthened year after year.

Therefore, we worked on our common goals and discussed the potential areas for cooperation. This led to the establishment of the first edition of the Asia-Europe Leaders’ Cooperation Dialogue, which took place in Rome in December 2018. The first event was also the result of the shift we have been experiencing in the international arena: the isolationist attitude of the new American administration may have opened new opportunities for dialogue and cooperation between Asia and Europe – not exclusively from a business point of view.

The first edition was set up in Rome to send a message to Italy and Italian companies, to emphasise that the cooperation between Italy and Asia, China above all, is grounded on similar cultural bases. Our two countries are bound by a profound respect for traditions, by millennial histories, and by the search for consensual solutions that make us naturally inclined to cooperation.

Chongqing’s choice for the second edition is not accidental. Chongqing represents the new Chinese frontier where the Chinese Central Government is developing plans to attract talents and build advanced research and manufacturing centers. These are sectors in which Italian companies are already strong at an international level and can perform really well.

Our goal is to build a community of European and Chinese companies that can get to know each other and deepen their understanding and mutual trust, both essential for developing business relationships that can lead to an increase in FDI in both directions. In this process we obviously want to support Italy – among the first European countries to open a consulate in Chongqing – in building a of “primus inter pares” role among the European countries involved.

Our idea is however that the forum remains itinerant. The 2020 edition will return to a European business capital to be identified among those with a key role towards Beijing, and then return the following year to Asia.

Are China and Italy experiencing a golden era?

What the institutions are telling us is that in recent years bilateral relations have intensified and, even before the Memorandum of Understanding to join the Belt and Road Initiative was signed last March, the two countries had already built strong ties and reached a positive convergence of views.

With the signing of the memorandum, however, we are witnessing a significant qualitative leap: the agreement reached in Rome has “touched the hearts of the Chinese”, and Beijing appreciated Italy’s role in supporting the friendship with China within Europe. We can therefore say that relations between the two countries are experiencing an extremely positive phase, which will be confirmed by the mission of our President of the Republic to China in 2020.

We must now work to spread positive and concrete effects on the activities of our companies. I believe that the future relationship will be based on reciprocal foreign direct investment: if trade plays an important role, FDIs are the key for job creation and economic development. I hope that the recent agreements will result in more greenfield investments and not just brownfields investments: high-tech investments that will lead to the establishment of new research centers in Italy, and then develop the potential of the Chinese market for the new entity.

Another important element is that of business culture: we need to support our enterprises, help them understand and simplify the Chinese system, which is not only very different, but complex and diversified, and that often creates a feeling of fake confidence that leads to wrong decisions.

Did the improvements of Sino-Italian relations have a positive impact on Ambrosetti activities in China?

For the past four years, “The European House” has facilitated and coordinated the role of the Italian delegation taking part to the Boao Forum. For the 2019 edition we brought to Boao the largest and highest-level European delegation, which included former Minister Tria and former Undersecretary Geraci, members of Prime Minister Conte’s first cabinet.

The leadership of Boao Forum saw it as a sign of a stronger connection to Italy. In March 2020, President Xi Jinping is expected to attend the Forum, and we wish to bring even a stronger Italian presence at Boao. Our ultimate goal is to create the conditions to launch the first edition of our historic Cernobbio forum in Asia.

What is the main goals of Chongqing’s Forum

The main goal of the Forum is the creation of a stable community made up of Asian and European companies gravitating around the two barycentres of our “Intelligence Summit” in Cernobbio and their Annual Conference in Boao. In this new bigger platform we want Italy to emerge as one of the best represented and – consequently – more successful countries.

In China, politics plays a key role in the success of business activities. The presence of top local leaders in Chongqing will offer Italian companies the opportunity to establish direct relationships with business counterparts and therefore interact more easily on mutual interests.

For more information and to apply to the forum look at this link:
https://www.ambrosetti.eu/en/summits-workshops-forums/international-summits-with-think-tanks/asia-europe-cooperation-dialogue-2019/