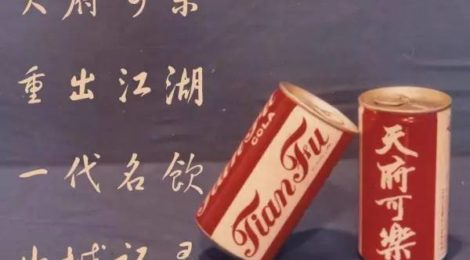 Dear readers, were you looking forward to the International Children’s Day when you were young? In the past in China, children enjoyed snacks and drinks not available at ordinary time, and for Chongqing people this includes Tianfu Cola (disappeared later after its cooperation with Pepsi). For this issue of CQ Stories, we will talk about the story of Tianfu Cola.

Tianfu Cola would have never been created without a Sichuan entrepreneur called Li Peiquan. In 1978, Li was transferred from the army to Chongqing Beverage Factory founded in 1936. Under the spring breeze of reform and opening up, this factory with shabby plants and equipment and single products (only bluebird soda and malt sugar) came up with the idea of development and innovation. On one occasion, Li and his technicians tasted coke in Beijing and visited the automatic soda bottling production line imported from Germany at Laoshan Soda factory in Qingdao, which inspired them to make popular “rube sparkling wine” and “chocolate champagne” in the local market, and laid the foundation for the production of Tianfu Cola. In 1981, when China launched a large-scale study of white peony root, Li realized that the detoxification function of this herb could be used as a selling point to produce a Chinese healthy drink. At the end of that year, Sichuan institute of Traditional Chinese Medicine successfully developed a formula based on white peony root, containing eleven Chinese herbal ingredients, such as rehmannia root and angelica root, which has a health care function. And more importantly, all its ingredients are homegrown. Li decided to name it “Tianfu” to show the richness of natural resources in Sichuan and Chongqing region. In terms of packaging, he asked the famous calligrapher and painter Mr. Zhou Boxi to autograph the four powerful Chinese characters of “天府可乐 (Tianfu Cola)”. Thus, Tianfu Cola was born, and quickly take over the market. In 1985, it was selected as the state banquet beverage by the administration office of the State Council and praised as the “generation famous drink”. In 1988, Chongqing Beverage Factory was renamed Chongqing Tianfu Cola Group co., LTD., with 108 bottling plants and a market share of 75%. Two years later, Tianfu Cola went abroad and set up a bottling plant in Moscow. After that, a Japanese company volunteered to be the agent of the brand and started selling it in the United States, which was the peak of Tianfu Cola.

In 1994, Tianfu Cola began to cooperate with Pepsi cola, but twelve years later in 2006, the two companies parted away with the result of Tianfu Cola disappearing and Pepsi cola’s market share in China exceeding that of Coca Cola, which entered China earlier than the former. We do not know what went on behind the scene, but we can see from the outcomes that the purpose of Pepsi cola is to find a breakthrough for its brand to enter the Chinese market, at the expenses of Tianfu Cola. In 2010, the two went to court, and Tianfu cola successfully sought back its formula and brand. In 2016, Tianfu Cola returned to the market, but now the cola beverage market has already been divided up by Pepsi and Coke, and Tianfu Cola is priced at four yuan, which is a little more expensive than other cola. We doubt whether it can regain its strength and compete with those two international cola brands. We had planned to interview Li Peiquan, but deeply sorry to hear that the old man passed away earlier this year. It’s a pity that we can’t know more about Tianfu Cola through him.

We hope that more local brands in China can enter the international market, which is not only the exchange of goods, but also the communication of culture. Please keep following us, thank you!