For our “Western China Food & Wine” series we have previously published two articles on Chinese wine regions, those of Yunnan and the Sichuan Alpine Wine region. We add a new chapter today by proposing to our readers a third “strategic wine region” in China, and much better known than those previously discussed, the one located in Ningxia. 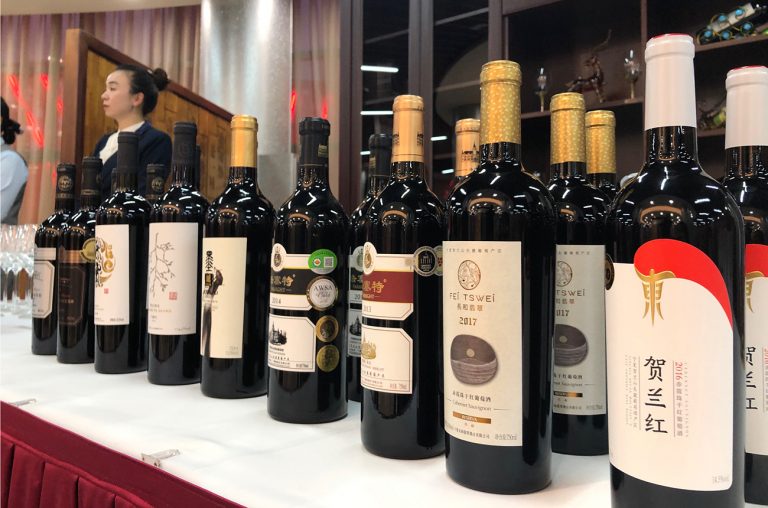 Wine produced in Ningxia presented during a wine tasting event

Ningxia is a small (compared to other Chinese entities) landlocked autonomous region in Northwestern China. It is bordered by Shaanxi, Gansu and Inner Mongolia. It is populated by only 6,3 million people, of which 30% is made by the Muslim Hui ethnic minority. Separated from Gansu in 1958, its recorded history dates back to 200 BC and beyond. Its capital and biggest urban center is the city of Yinchuan.

In recent years, the attention of the Western world towards Ningxia has increased exponentially for a very specific reason: the growth of its local wine industry.

According to data collected in 2020, in Ningxia that year there were 211 wineries with an annual output of 130 million bottles of wine, while the value of the region’s winemaking industry reached 26 billion RMB. The majority of wineries there are “small boutiques estates” focused on high quality vintages with an average production of less that 100000 bottles per year each. Big international players, such as LVMH and Pernod Ricard, invested in Ningxia and founded the Domaine Chandon and Helan Mountain wineries.

As of 2019, the total size of wine plantations in Ningxia reached about 38,000 hectares – a quarter of the total size in China. Numerous varieties are produced in Ningxia including Marselan, Malbec, Pinot Noir, Riesling and Chardonnay.

This wine region is special not only for its numbers, but also for its weather characteristics.  As stated by Mike De Simone and Jeff Jenssen, this is a very cold region, where wines are planted at a 35 degree angle in order to bury them under soil from November to April, so that they do not freeze and die under heavy winter snowfall. 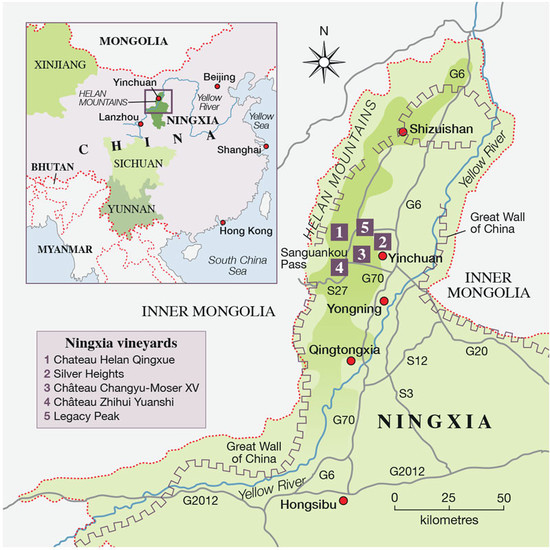 A map of Ningxia main vineyards

A sub-region of Ningxia that has become famous for its wine is that of the Helan Mountains. In 2003, as underlined by the two journalists of Forbes, it became China’s first official appellation, recognized by the Chinese General Administration of Quality Supervision, Inspection and quarantine. The region is also known as the “Bordeaux of the East” and a World Winery Golden Belt. The pristine environment is far from pollution in a well-preserved nature that is increasingly popular with winemakers. In this area some wineries have made their name renowned: Silver Heights, Kanaa and Helan Qingxue are famous in China for their products and entrepreneurial success and business innovation oriented attitude.

The Covid19 pandemic hit the local wine sector hard. As stated by Alice Liang, for this reason, in 2020 the Ningxia Agriculture and Rural Department and the Finance Department announced a fund of 30 million RMB to subsidize the industry of local wine as many wineries were expected to encounter financial difficulties. But last year we also saw positive vibes in the region: in the administrative entities of Qingtongxia, Hongsibao e Helan, six ventures sent to local governments offices construction plans of new wineries and the expansion of existing properties, planning investments for a total of 250 million RMB.

As written by Matteo Fagotto for Esquire Singapore, although China is rapidly becoming a point of reference not only for international wine imports, but also and above all for its wine production, Chinese pro capita consumption is still very low compared to other historical “wine countries” and the “New World” of wine. The challenge is therefore not only at a productive level, but also and mostly important at a cultural one.

While it is necessary for China to continue investing in innovation and learning new industrial techniques, on the other hand the creation of products that encourage regional and national consumption, but also enhance the culture of wine and wineries in Ningxia is highly required to make a “great leap forward” for wine in China. In this long and challenging process, an alliance with tourism could help the wine industry mature and grow stronger. 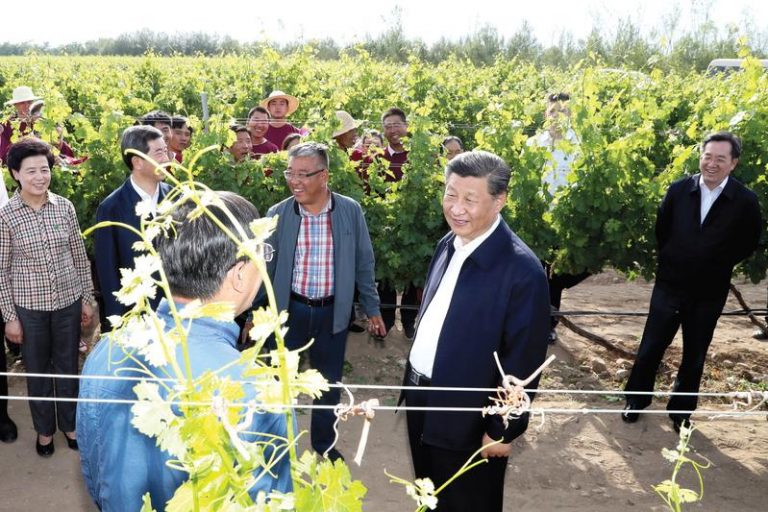 From a tourist point of view, Ningxia has its center in the city of Yinchuan. Although not connected by superfast trains to other Chinese megacities, it can be easily reached by plane from the main urban centers of the country. From Yinchuan it is possible to visit the Western Xia Tombs, the last vestiges of the Tangut civilization. The territory is also crossed by the ancient sections of the Great Wall, some of which date back to the Warring States period (475-221 BC).

But the real surprise from the tourist point of view of this region is represented by wine tourism: by 2020 the number of tourists who went to Ningxia for a visit to the wineries was 600 thousand units. A number that can only grow over the next few years, representing an interesting case study also form Western wine experts and professionals.

In 2020, the visit of President Xi Jinping to the Yuanshi winery has certainly given support and momentum to the sector, confirming the importance of the region in the national wine scene. Local government is investing heavily to promote wine tourism routes and activities. Tourism before the pandemic was considered important for the region: the main goal was to bring to the autonomous region at least one million domestic and international tourists by 2020. National competition with the other “wine powerhouse” of China, Shandong province, can only stimulate the entrepreneurship of local wineries to create a unique way of presenting Ningxia products and successful stories.

Stay tuned for more insights into Western China’s food and wine in our “Galileo Weekly Observer” column. If you are interested in Chinese wine market send us an email to galilei@santannapisa.it