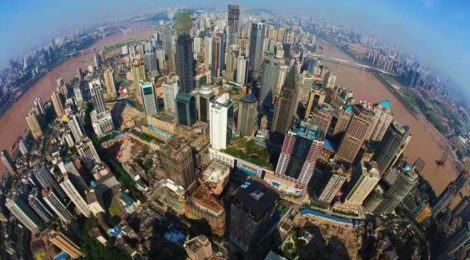 Dear friends, how time flies! Here we are, in the last month of 2019 now. In our previous Chongqing stories, we focus mainly on local culture. But as you know, Italy is a Catholic country and there are two very important religious holidays in December, one is the Feast of the Immaculate Conception (“Immacolata Concezione” in Italian) on December 8th , which is not well known by Chinese people; the other is the Christmas on December 25th , including the Christmas Eva the night before. So in this special month, we’d like to explore the footprints of Catholicism or Christianity in Chongqing——Churches.

At the end of the 19th century, the Yuzhong peninsula, enclosed by 17 gates, with nice open and eight closed, was the main area of the old Chongqing city. At the Center of this area stand two churches with a long-standing history and far-reaching influence, Saint-Joseph Church and Christian Holy Love Church.

Located in Minsheng road, Yuzhong district, Joseph church is a Catholic church that serves Saint Joseph as the patron. It was built in the fifth year of the reign of Emperor Guangxu of the Qing dynasty (AD 1879). It covers an area of about 1,700 square meters and can accommodate more than 1,000 people. In 1917, a bell tower with a height of more than 50 meters was built at the gate of the church. Inside the tower, three large chime clocks and gold bells of different sizes were put in place. On every Sunday and major religious festivals, three bells chime together, the sound of which can be heard for miles around. During the war of resistance against Japanese aggression, the siren was placed in the bell tower, making it an important air defense alarm point in Chongqing.

Christian Holy Love Church, formerly known as the “social hall”. Around 1900, American missionaries bought a house and established a church at no. 96 Ciqi street, Yuzhong district. In April 1998, the original church was demolished due to the reconstruction of the old city. The eight-story-high new church was completed on December 23, 2005 at no.55 Minquan Road, Yuzhong district and renamed as “Christian Holy Love Church”.

On March 1st, 1891, Chongqing customs was established and the port was officially opened. After that, a large number of foreigners poured into the area of Danzishi in Nan’an district, where foreign shops were opened, consulates and barracks were established and various western-style building were constructed, including the Christian church “Yide Hall”. This Gothic church was pulled down in the renovation of the old city and was rebuilt later in the original place.

On the hill of Cimu mountain in Jiguanshi, Nan’an district located a Roman Catholic church surrounded by jungles, called Cimu Hall, also known as the French church. The construction of the church was started in the third year of the reign of Emperor Xuantong of the Qing dynasty (AD 1911) and it took two years to complete. The building covers an area of 80 mu, with over 80 large and small rooms and became a Catholic seminary in Chongqing later.

In this first part, we introduced you four churches and we’ll share more information about churches in Chongqing in the next issue of Chongqing Stories. Stay tuned!