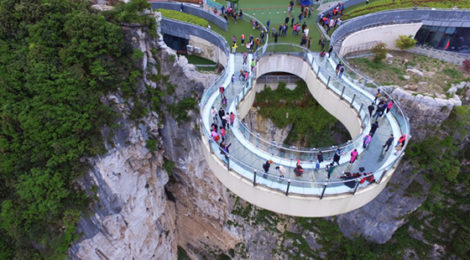 Yunyang Longgang (云阳龙缸, Yún yáng lóng gāng) Scenic Area is a national geological park located in the southeast Yunyang County, 380 kilometers from downtown, in the northeast of Chongqing Municipality. Its name “Longgang” in Chinese means “Dragon Jar” because it looks like a huge natural jar. The scenic area is built on the cliff of 1,010 meters above sea level and it is hundreds of meters long and deep. Therefore, its depth is the third deepest in China and fifth in the world. This huge national park is characterized by valleys, caves, forests, meadows, karst sinkholes, rivers and canyons. Therefore, Longgang Scenic Area is considered as a natural science museum. Thanks to its natural beauties, it is called the last “Shangri-La” of the Three Gorges of the Yangtze River by tourists and it has been promoted as one of the National AAAAA Class Tourist Spot, National Geopark and National Day 2016 “Best Tourist Service Scenic Spot”.

The naturally-formed Longgang Tiankeng, known as “the first cylinder in the world”, has a depth greater than 335 meters, its form and depth is extremely rare for such similar landforms, for this reason its depth is second only to Xiaozhai Tiankeng and Dashiwei Tiankeng in China. It is a fractured zone, an elliptical karst sinkhole formed by repeated karst collapse and karst erosion. Thus, it attracts tourists’ attention for its unique karst geomorphology. 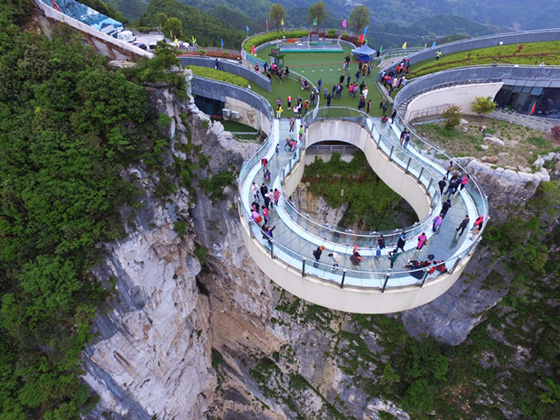 The Skywalk on Clouds is the most visited attraction of the entire Longgang Scenic Area, but it is not a place for the fainted-hearted. Built at an altitude of 1,010.5 meters and situated at the top of the steep cliffs, this bridge is made of laminated ultra-clear glass, so it is completely transparent. Under your feet you can see the Stalagmite River and Gaixiaba Reservoir and you can enjoy a panoramic view of the whole scenic area. This bridge is 26.68 meters long and 718 meters above ground, so there is no doubt about its name’s meaning. When you are walking on this speechless glass bridge, it seems that you are walking in the sky. For its dizzy heights, the skywalk was the host site of the 2018 World Low-Altitude Parachute Jump Contest. 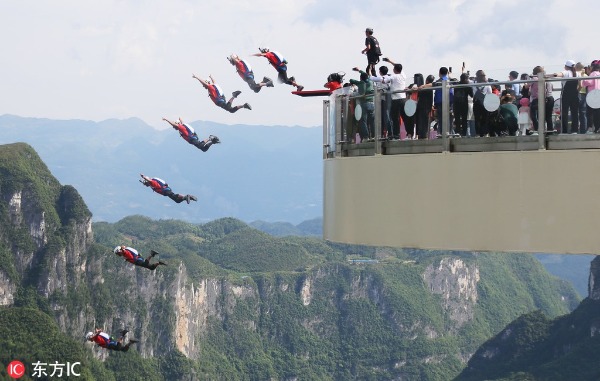 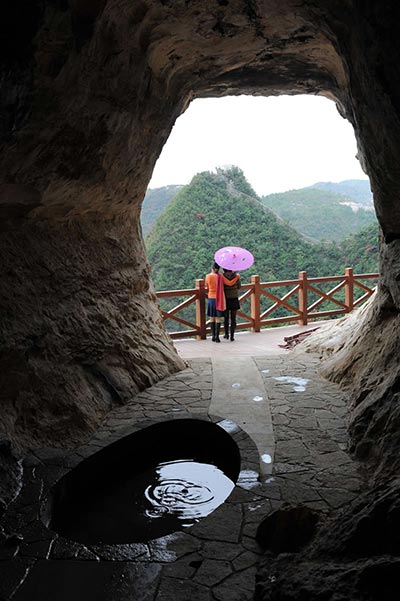 Yingyue Cave is located in the cliff of 100 meters northeast of Longguan Tiankeng and it is the first layer of karst cave. The length of the cave is 43 meters, the height of the south hole is 3.9 meters, the height of the north hole is 2.2 meters and the diameter is 3.4 meters.  Its name “Moon Cave” comes from a natural phenomenon which occurs every year in the Mid-Autumn Festival night, when the moon rises from the east and the moonlight fills the whole hole, creating a magical scenario called “reflecting the moon through the hole”.

Qinshan Grassland is a karst mountain with an area of 12.5 square meters, characterized by primitive forests and alpine grassland. It is a perfect place to have a nice walk, observing its scenic area with different tree species such as pine, cypress forests, metasequoia and so on. 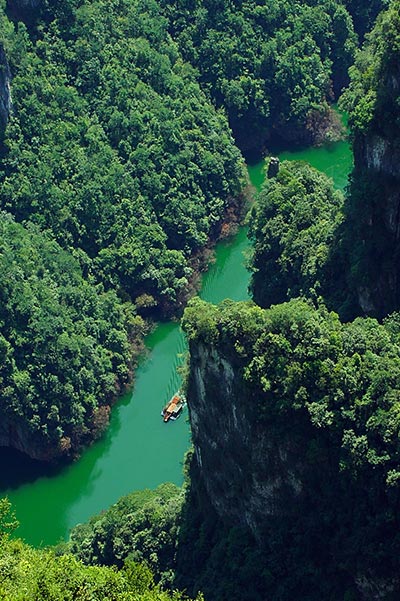 The Stalagmite river may be considered the most beautiful section of the Long Beach River. With a total length of 12.5 kilometers, it forms a spectacular karst landscape which is a “must-be” place here in Longgang. The green mountains, the bamboo rafts, the clear water, the waterfalls, the fishes, the different rocks and peaks created by corrosion…Everything here is so magic! 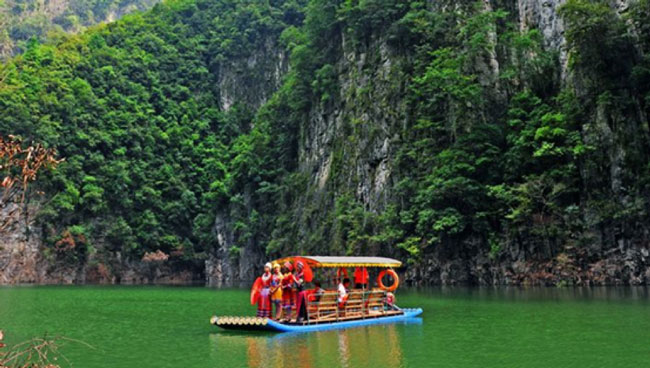 The Dragon Cave consists of two halls, the front hall and back hall. The front hall is round, covering an area of 4,800 square meters, with a variety of stalactites. Here there are several natural landscapes such as: “Baiyulong Bed”, “Dragon Umbrella”, “Dragon Pot” and other more. The back hall is pentagonal, covering an area of 6000 square meters. Here, the stalactites are like lions, elephants, dragons and phoenixes, with teeth and claws open and wings spread. 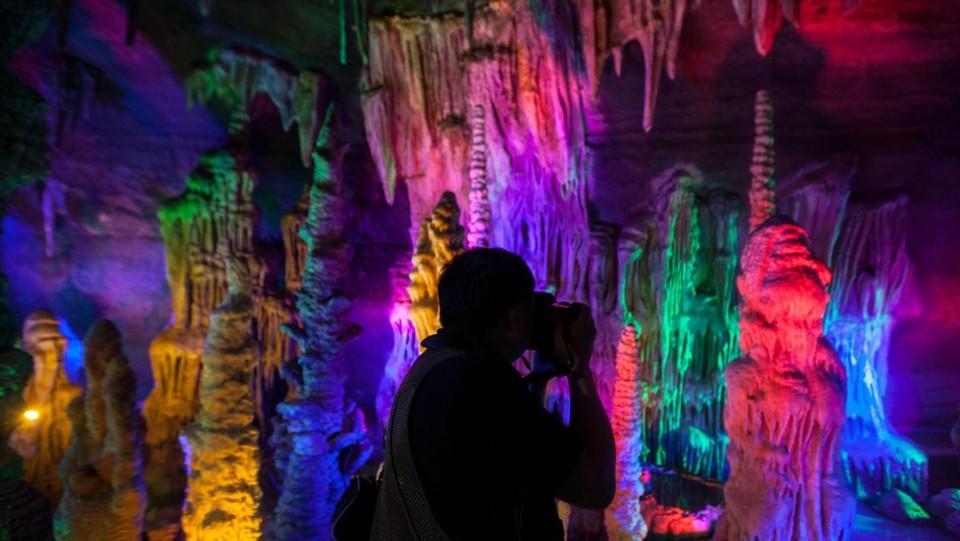 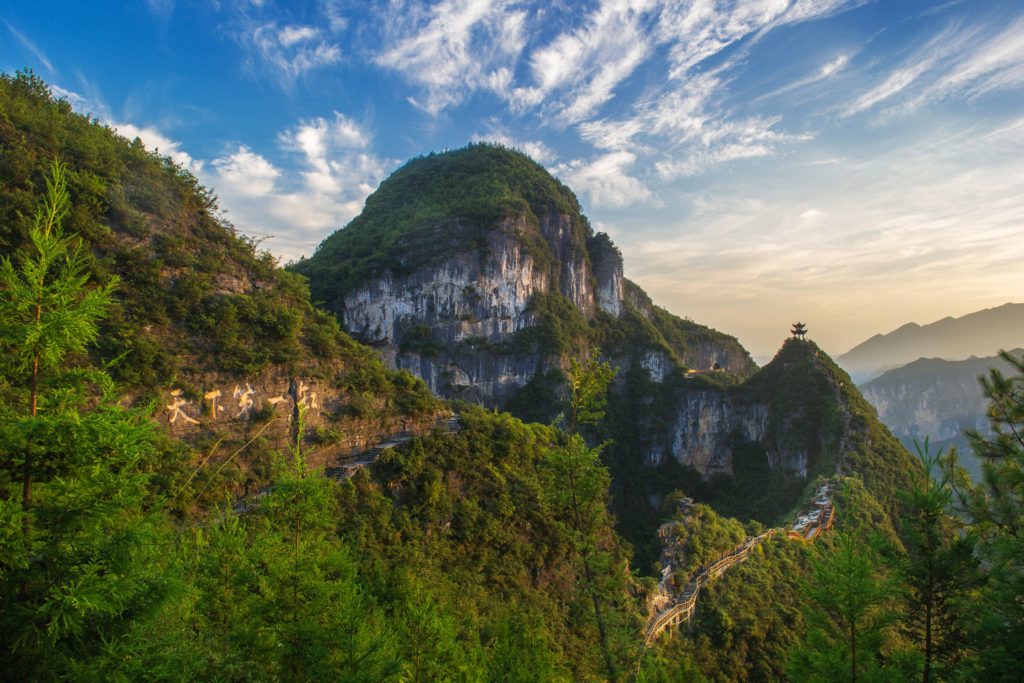 Please share:
Tags: Explore Chongqing
← The Site of the Provisional Government of the Republic of Korea in Chongqing
Chongqing-Guang’an regional cooperation in the field of red tourism →