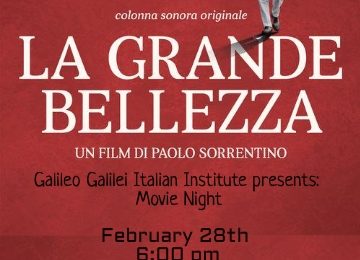 The Great Beauty is a 2013 Italian art drama film co-written and directed by Paolo Sorrentino. Filming took place in Rome starting on 9 August 2012. It premiered at the 2013 Cannes Film Festival where it was screened in competition for the Palme d’Or.

The film opens with a quote from Céline’s Journey to the End of the Night: “Traveling is very useful: it makes your imagination work, everything else is just disappointment and trouble. Our journey is entirely imaginary, which is its strength.” After his sixty-fifth birthday, Jep Gambardella, a journalist with a passion for parties and beautiful women, finds himself lost between the nostalgia of the past and the uncertainty of the future. Jep realizes that he has lived superficially: so begins the search for great beauty, between the declining bourgeoisie and the stereotypes of society.

Please share:
← Sino-EU relations: The role of tourism and the city of Chongqing
The Italian Food Market in Chongqing →