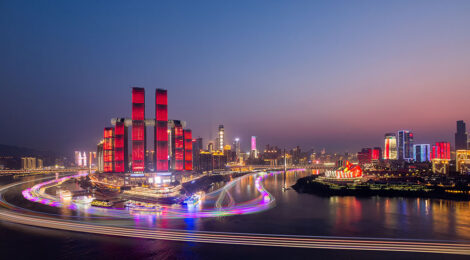 Introduction to the new “Economic Circle”

Dear readers of our column “Galileo Observer”, welcome to a new episode of the series called “From quantity to quality”. We are inaugurating a new list of articles that will focus on the “Chongqing-Chengdu Economic Circle”, a brand new economic, urban and technological zone located at the core of Western China.  In this very first part, we will offer you a brief introduction, highlighting some key data, while later we will analyze some characteristics that make the new area strategic in China’s development in the “New Era”. 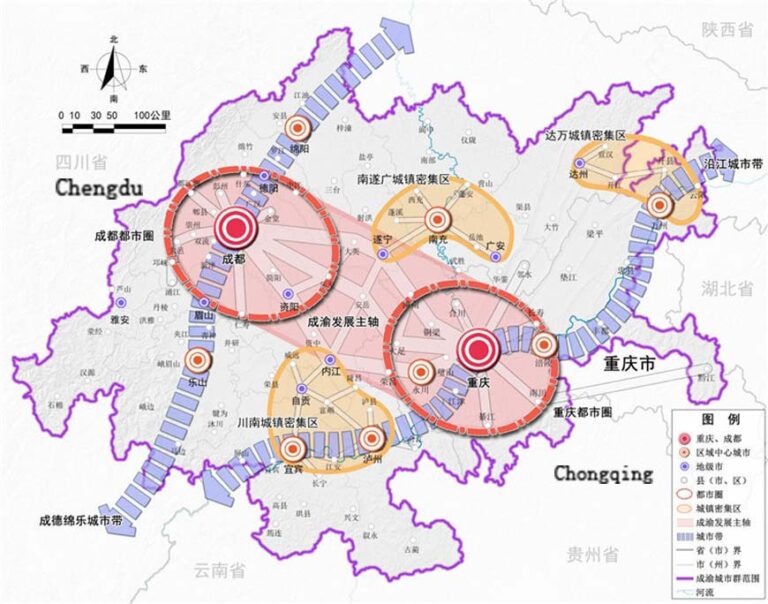 Map of the Economic Circle in Western China

Western China is becoming increasingly central in Chinese government development strategies. We have seen this in the past with the launch of the “Go West policy” and the consequent Western Development Strategy. In 2019 we analyzed the implementation of the “Chongqing-Chengdu City Cluster“, an immense urban area that was later “ institutionalized” with the creation and official launch of the“ Chongqing-Chengdu Economic Circle ”. This area became immediately a candidate to join the exclusive group of the main areas of the People’s Republic of China with regard to economic development, innovation, investments and scientific research. The “Economic Circle” framework was launched to facilitate the integration of the two main urban areas of the region, Chongqing and Chengdu, together with the other smaller urban clusters (like Wanzhou, Nanchong, Yibin), focus on strategic industrial sectors and cooperation to be supported and developed, sustain the “internal circulation” of the region but also look outward to play a role in the “external circulation” within the new “dual circulation” pattern of China.

Since its creation National policymakers are now counting on four “Chinese engines” of economic growth: together with the “Economic Circle”, we can quote the Beijing-Tianjin-Hebei Region (also called Jingjinji), the Yangtze Delta economic region (with Shanghai megalopolis at its core surrounded by a string of incredible mega cities, like Nanjing, Hangzhou, Ningbo), the Guangdong-Hong Kong-Macau Greater Bay Area, which includes Hong Kong, Guangzhou, Shenzhen and numerous other mega cities. 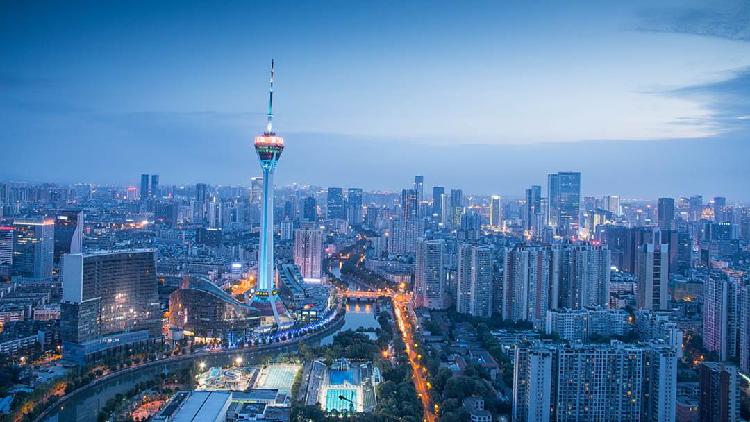 The beauty of Chengdu city center

One of the main goals of the “Economic Circle” is to support to openness and internationalization of companies in the region. In particular, in the two core urban areas of Chongqing and Chengdu there are two of the “spiciest” strategic areas in all of China: the Liangjiang New Area, and the Tianfu New Area. In this macro special zones, local institutions are organizing events, supporting and incentivating foreign investment, build new infrastructures and industrial parks to boost local enterprises and attract new ones to open their headquarters. The number of Chinese and foreign companies interested to explore new investments in Chengdu and Chongqing is rising.

At the same time, the thirst for innovation both in Chengdu and Chongqing is significant. New innovative activities have been developed recently. As written by James Alexander last year, a Sci-Tech Innovation Alliance was launched in Bishan, six provinces and cities were included in the National Digital Economy Innovation and Development Pilot Zoned in 2019, while the sectors in which local administrators are focusing more are the ones of integrated circuits, big data, internet of things, cloud computing, information security and intelligent manufacturing.

The role of infrastructures is also central in the new “Economic Circle”. Last December, a new high speed railway link between Chongqing and Chengdu was inaugurated, reducing the travel time between the two cities to one hour. The frequency of bullet trains has also been increased to one every 20 minutes, strengthening the exchange opportunities between the two mega cities. It is now very convenient for entrepreneurs, researchers or travelers, to design an “Economic circle” strategy for their businesses, life plans or leisure time. 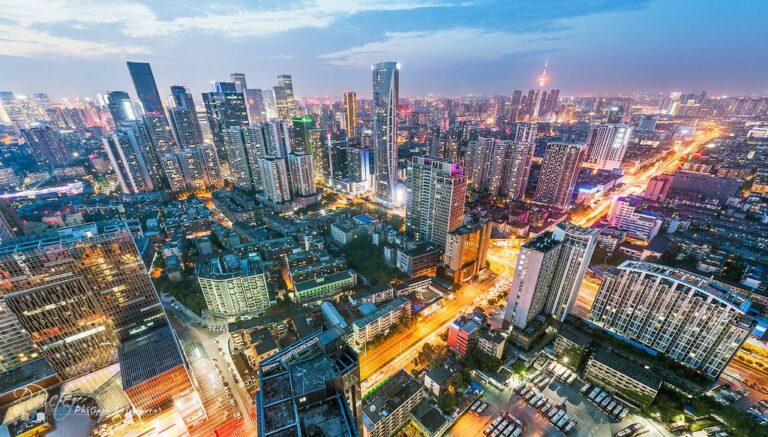 The skyline of Chengdu at night

Tourism plays a new role in supporting the economic growth in the “Economic Circle”, with a massive amount of new investments fueled by local leaders, with Chinese giant OTAs (Online Travel Agencies) playing the main part but also new smaller startups with an increasing role. For the “Observer” we previously analysed the cooperation regarding Chongqing-Guang’An in the field of “red tourism” and the creation of the Bashu Cultural Tourism Corridor. Cultural tourism can be a new engine for growth in the Economic Circle, thanks to the incredible variety of fascinating tourism destinations and their cultural richness.

Chongqing and Chengdu , as iChongqing pointed out, share interesting similarities with regard to tourism scenic attractions. It is in fact possible to identify destinations with similar characteristics, which can be enjoyed during a visit to the two cities.

If you are attracted by historical and cultural sites, in Chongqing it is highly recommended a visit to Hongyadong, one of the coolest places at night in Chongqing and where the true spirit of the Municipality lies. In Chengdu, on the other hand, it is possible to find the Kuanzhai Alley (wide and narrow street), where remains of old buildings of the Qing Dynasty (1636-1912 AD), Qing Style quadrangle courtyards, and numerous restaurants and places where you can enjoy local delicacies are all combined.

On the other hand, if you want to get out from the buzzing city center of Chongqing, the sites of Dazu Stone Carvings, with their more than 50,000 Buddha statues distributed in 75 caves, offer a unique and enriching experience. Leshan Giant Buddha, is the other attraction you can visit. Considered one of the main attractions of all Sichuan, this is the tallest Buddha sculpture in the world (71 meters), included in the UNESCO list in 1996. The Buddha became viral on Chinese socials recently for having its toes reached by water during the floods of last year. 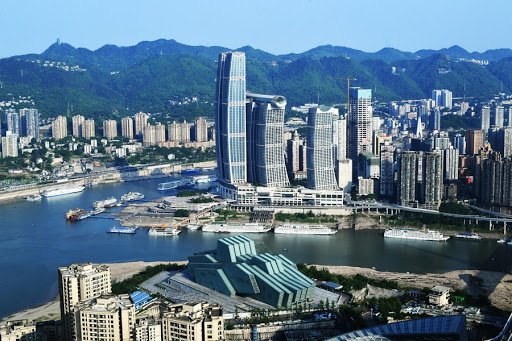 The impressive combination of skyscrapers and nature of Yuzhong, Central Chongqing

The role of the Italian institutions in the region

As stated by our Director Alberto Di Minin in a recent interview for the media company “China Files”, Italy has a great positioning advantage in this part of China, built with wisdom and vision over the years. Italy is in fact a protagonist in Western China, through the presence of Italian institutions (lead by the Consulate General of Italy in Chongqing) and numerous activities distributed in the two key cities. Our country has invested heavily on a set of solid relations within the “Economic Circle”, human capital, people to people cooperation and dozens of talented and tireless diplomats, entrepreneurs and professors have made Western China their home in the last decade.

When it comes to the activities of the Chambers of Commerce, elections for the new board of the European Chamber of Commerce, southwest Chapter, were recently held in Chengdu. Excellent news is the election of Massimo Bagnasco as its new Chairman, a position that he adds up to that of National Vice President of the Chamber. In recent months, the Italian Chamber of Commerce in China has also opened its new office in the Tianfu New Area in Chengdu.

As for the Italian academic sector, on the other hand, Sant’Anna School of Advanced Studies remains the reference point in this region, thanks to the presence of our Institute at Chongqing University, celebrating in 2021 its fourteenth year. It acts as a platform for Italian academic institutions that are willing to grasp new research opportunities with local Universities, Professors and researchers, and an academic bridge for shared knowledge between Italy and Chongqing.

If you want to know more about the “Economic Circle” opportunities, feel free to contact us at marco.bonaglia@santannapisa.it